Story via our Australian distributor, Fuwa K-Hitch.
Article placed in the March 2020 edition of Trailer Magazine.

The manufacture of robust and stylish tandem- and tri-axle dollies is the main game for Dominator Equipment. The incorporation of Fuwa K-Hitch heavy duty axles, suspension, ballraces and other quality components is proving to be highly successful.

Manufacturing road transport equipment in Australia is a tough gig. Relatively high labour and material costs can make for a tricky balancing act ensuring the end product is fit for purpose while at the same time remaining price competitive. On top of this, manufacturers located in regional areas have the tyranny of distance and potential shortage of suitably skilled employees with which to contend. To ensure business viability, cost effective and quality assured components that will go the distance need to be sourced from reputable suppliers. Another prerequisite for local manufacturers is that they possess the intimate knowledge and skills to produce equipment of a suitable standard for harsh Australian operating conditions, particularly in the roadtrain realm.

Based at Lake Cargelligo in western NSW, Dominator Equipment appears to be taking all these challenges in its stride as it turns out a respectable number of impressive looking tri-axle dollies to service the heavy-duty road train market. The company is a spin-off from Duro Tank, also based at Lake Cargelligo and owned by brothers Darryl and Leon Small, an outfit that specialises in the manufacture and sale of steel and poly fuel and water tanks and trailers for mining and agricultural applications.

Around 18 months ago the brothers decided to diversify into building roadtrain dollies as part of the Duro Tank operation. More recently, the decision was taken to separate the two operations with Leon taking the reins as Managing Director of the newly formed Dominator Equipment company. Having started work as a farm hand after leaving school, Leon says he developed a fascination for all things mechanical and decided to return to study engineering and gain the various certificates and qualifications in this field. He was then in a position to design equipment subsequently produced by Duro Tank including 22,000-litre truck-mounted water shuttles and dust suppression units used on mine sites.

Over the ensuing years, it has been something of a natural progression for Leon to move further into the design and manufacture of road train dollies. With the companies now operating as two separate entities, Darryl remains in charge of Duro Tank while Leon heads up Dominator Equipment.

Asked his reasons for choosing Fuwa K-Hitch components, Leon says he was introduced to the products by some of his mates in Parkes who build transport equipment and use a lot of Fuwa K-Hitch axles and suspension. After checking it out for himself, he could see the quality of the products, along with the value for money, and decided to standardise on them. He particularly liked the look of the heavy-duty parallel bearing axles which he says are ideal for the roadtrain dollies. “We’ve had no complaints whatsoever from any of our customers about the Fuwa running gear,” Leon says. “We are very glad we went with these components and we continue to be impressed with the way the Fuwa axles and suspension are standing up to the harsh operating conditions typical with roadtrain work.”

Fuwa K-Hitch Regional Sales Manager, Diaa Bishara, says that Fuwa has been supplying the trailer builder with VDL air suspension systems and 10-stud drum brake axles complete with Anti-Lock Braking System (ABS) and Auto Slack Adjusters for almost five years. “The VDL is a U-bolt attached suspension that allows flexibility for Dominator Equipment when fitting the full range of axle sizes including 17.5-, 19.5- and 22.5- inch drum and disc brake variants,” Diaa says. “Fuwa K-Hitch welds and assembles the suspensions to the axles at nominated chassis rail centres at its Derrimut (Vic) facility as well as pre-installing additions such as ABS pole wheels, brake boosters, sensors and automatic slack adjusters.” Using this method, Diaa elaborates, customers receive a modular suspension ready to install easily to the chassis, eliminating the hassle and potential risks of preforming critical welding and torque requirements themselves. Diaa further explains that Fuwa K-Hitch also supplies Dominator Equipment with other trailer and dolly components including landing leg sets, spring brakes, Fuwa turntables drilled to suit the company’s requirements, ballraces, drawbar kits and tow eyes, which he says makes life as easy as possible from a supply perspective. “All this is achieved while still offering extremely competitive pricing and what we believe is industry-leading stock availability and the shortest production turnaround times in the business,” Diaa adds. “In fact, generally we can have the product delivered to customers within five to seven working days after the order is placed, giving them greater flexibility in planning their own production requirements. For anything outside of this we are only a phone call away and ready to assist wherever possible.”

Fast Fact
Specialising in the production of robust tri-axle road train dollies, Dominator Equipment relies upon the expertise of Fuwa K-Hitch for its axles, suspensions, ballraces and other components. 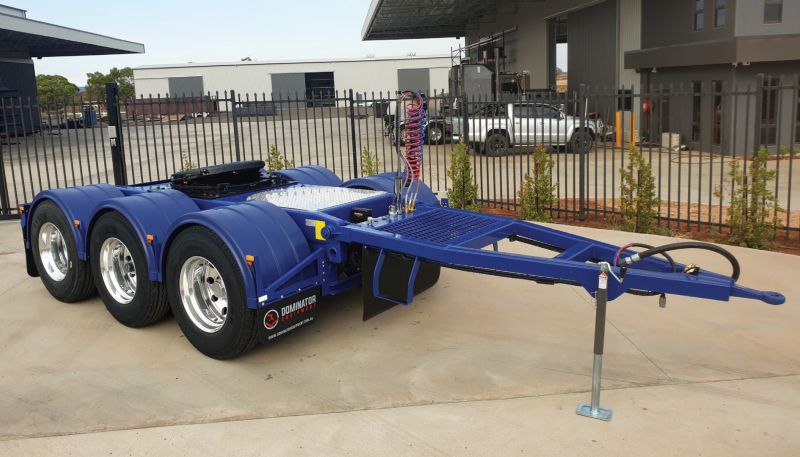